What's the difference between a Conservatory and an Orangery?

With over 38 years’ experience in designing and making conservatories and orangeries, it is a question that we often get asked and you would not be alone in wondering what the differences between a conservatory and an orangery are. 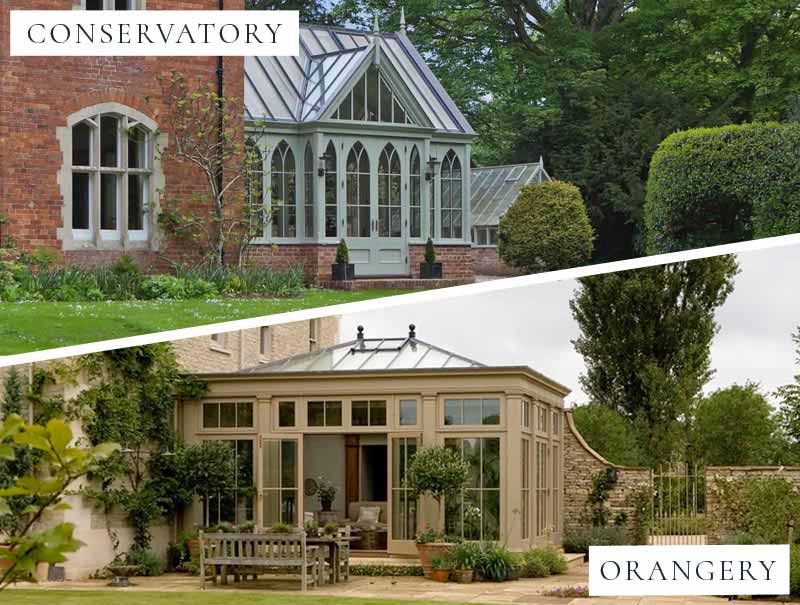 What came first the orangery or the conservatory?

It was the orangery, which originated from the Renaissance gardens of Italy between the 17th to 19th Century. Orangeries were luxurious extensions or free standing buildings for housing orange and lemon trees in the winter months to protect them from the elements. Having such a structure was a sign of wealth and prestige and the owners would impress their guests with tours showing off both the architectural design of the orangery and the interior citrus trees. 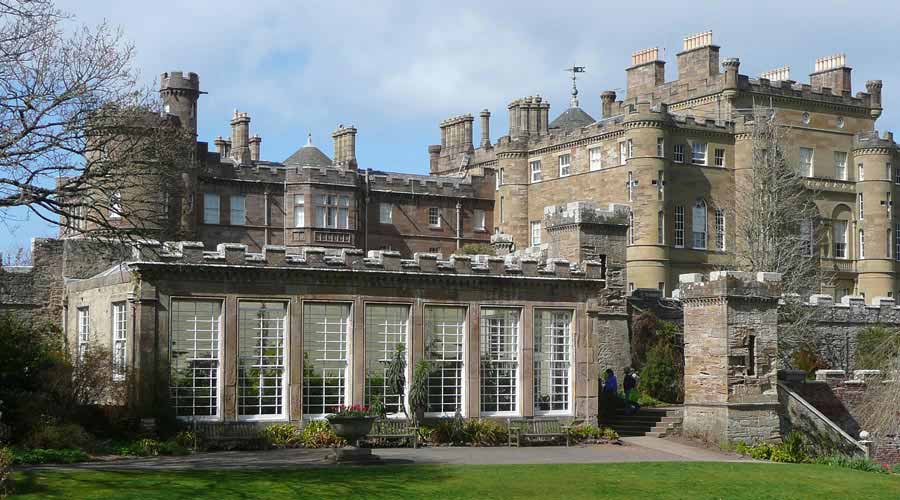 Architecturally, the Roman inspired designs would have been built of stone and would house tall narrow windows, usually south facing, to allow in as much light as possible for the nurturing of tender orange and lemon trees over winter – hence the name. They would have had a solid roof and were generally heated throughout the winter to maintain a temperate climate as found in the Mediterranean. The Orangery soon became an architectural feature in its own right as there was little regard for the health of plants and trees, only that they should ‘survive’ winter.

As glass making technology evolved the Dutch adapted the designs by developing larger expanses of window glass and it was in the early 19th century that sloping glazed roofs were introduced which allowed more sunlight into the building. The green house was born and keen horticulturalists whose cultivation of exotic plants had reached new heights, gained greater understanding of the benefits of light on plants. The glazing of orangery roofs also became increasingly common during this century.

Manufacturers emerged during the Mid 19th Century to cater for a growing middle class market. Breakthroughs in heating and glazing lead to a wealth of designs for horticultural buildings constructed in both iron and timber, often embellished with elaborate decorations. Whilst mostly free standing or abutting walled gardens, it was the building of these structures against houses that further developed the concept we now know as the early conservatories.

Below are two examples of early conservatories: 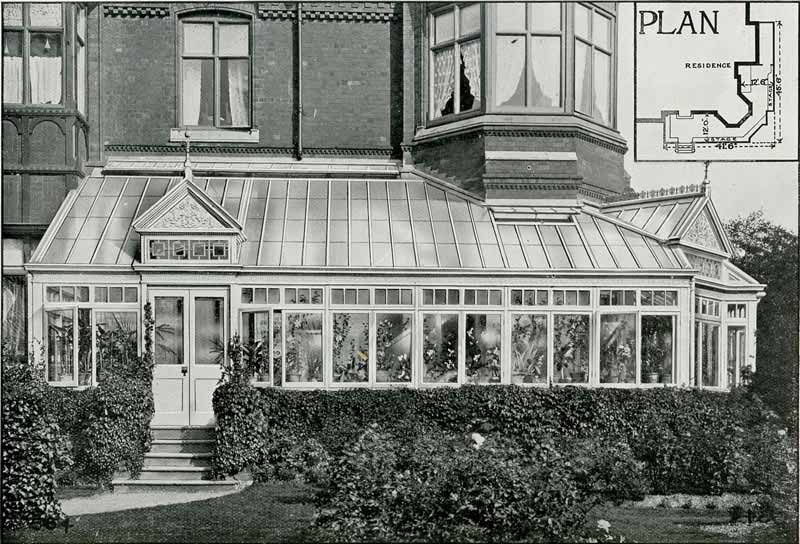 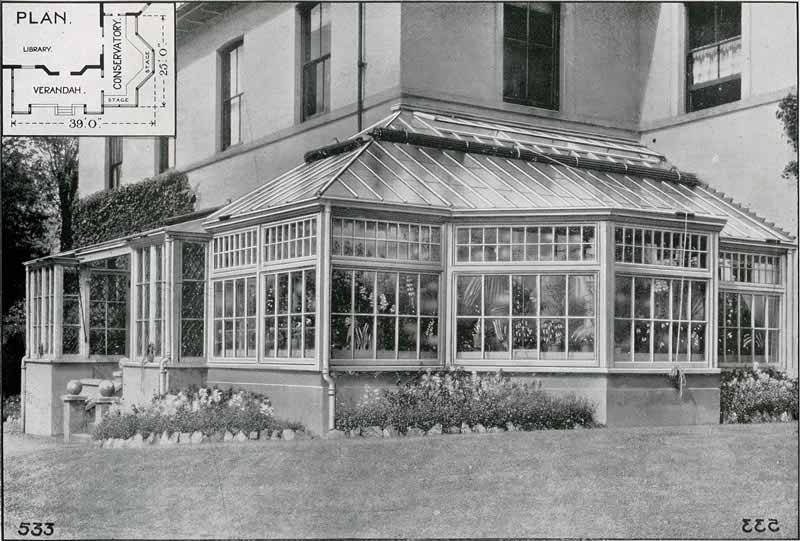 What's the main difference
between a conservatory and an orangery?

It is in a combination of factors – mainly seen in the amount of glass within the structure and the differences can be demonstrated in both the roof and the side, but it is also found in the general construction of the roof.

In the roof construction, a conservatory will generally have over 75% of the roof glazed whilst an orangery will have less than 75% glazed.

With an orangery, the construction will reflect the original 18th Century buildings and house an inset roof within the surrounds of a secret gutter concealed externally by a deep entablature, therefore reducing the amount of glazed area. A shallow roof pitch also creates a diminished roof profile which is in-keeping with architectural styles of that period. 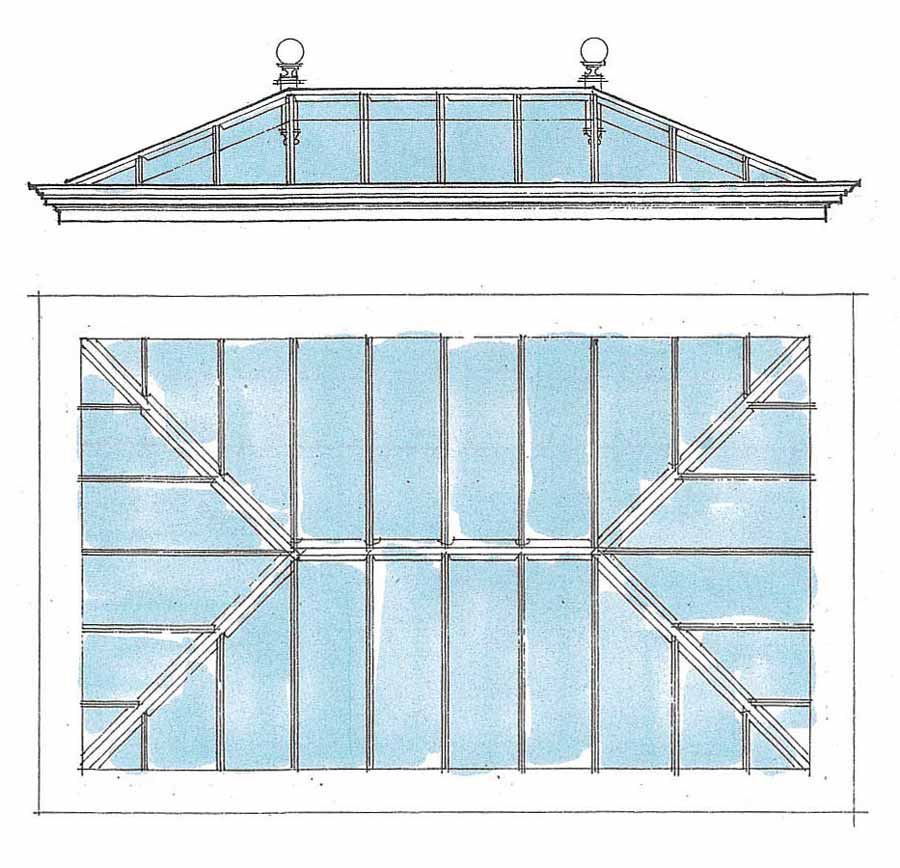 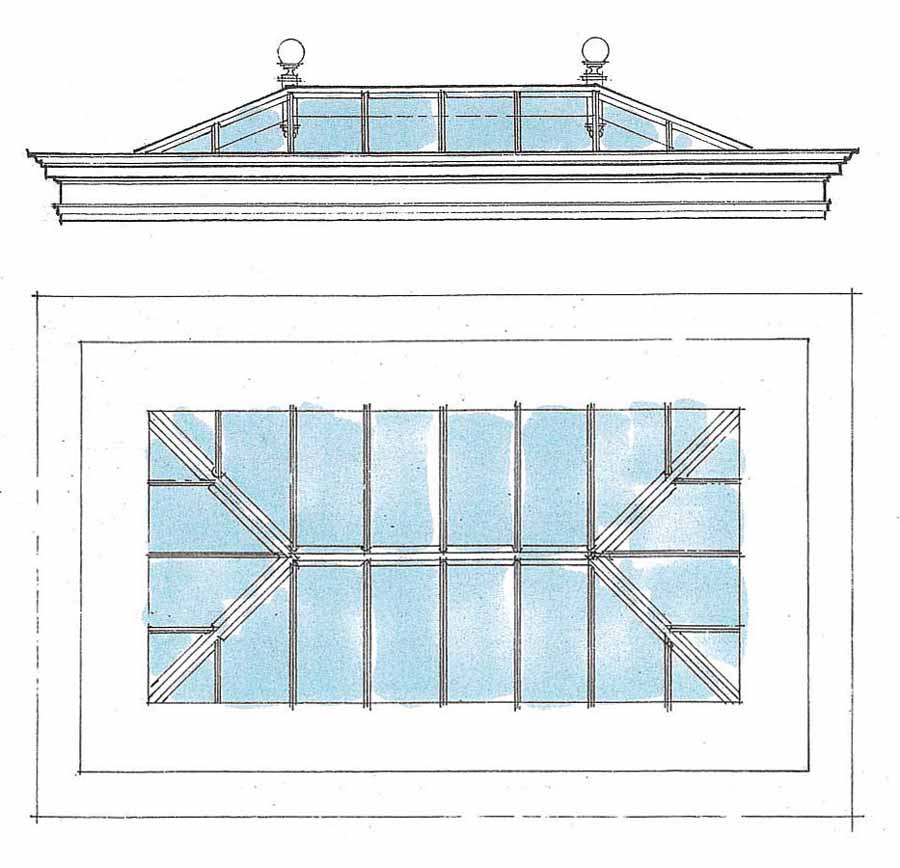 Similarly, a conservatory will have a more delicate side framework and larger proportion of glazing to other features that may be found within the side. In contrast, an orangery will incorporate generous sized pilasters and entablature, creating the feel of a more substantial build.

Here are a couple to images which show the different roof designs clearly: 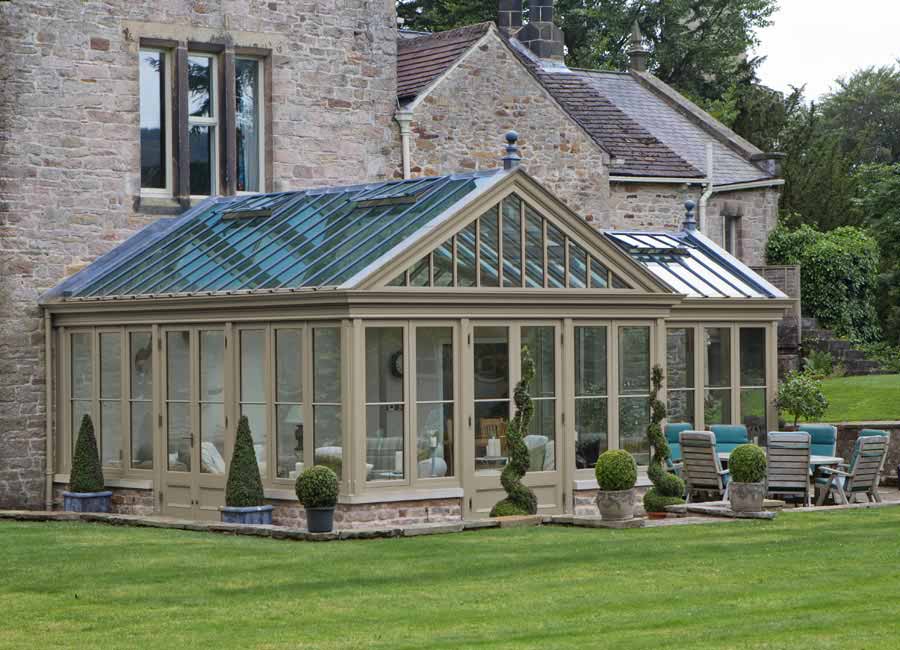 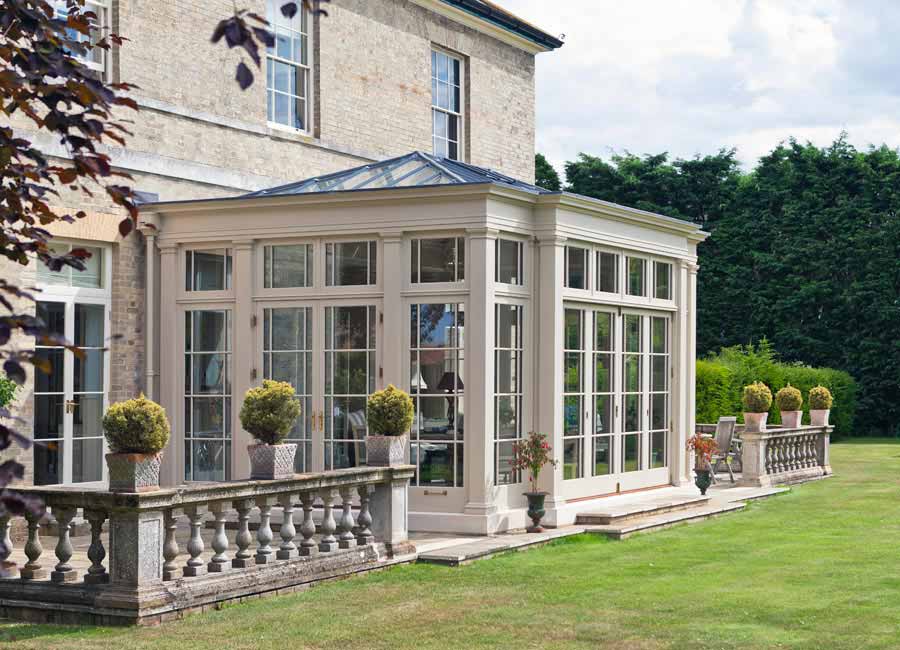 Internally, what is the difference
between a conservatory and an orangery?

Due to the structural differences in the roof and sides, the interior of an orangery will generally have an inset ceiling running around the perimeter of the room. It will create a slightly more enclosed feel and will also provide options for downlighting. External columns are often reflected internally and these too provide the ideal place for wall lighting.

In contrast, the interior of a conservatory will have a finer and lighter feel to the room due to increased proportion of glazing to the roof and sides.

Please see the examples below for comparison:

Example of a Conservatory Interior 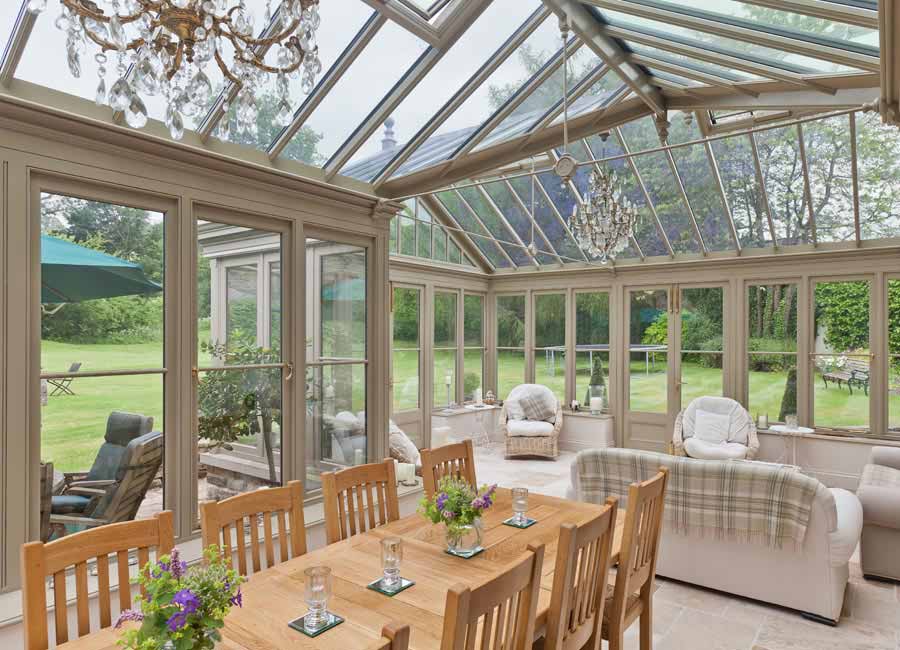 Example of an Orangery Interior 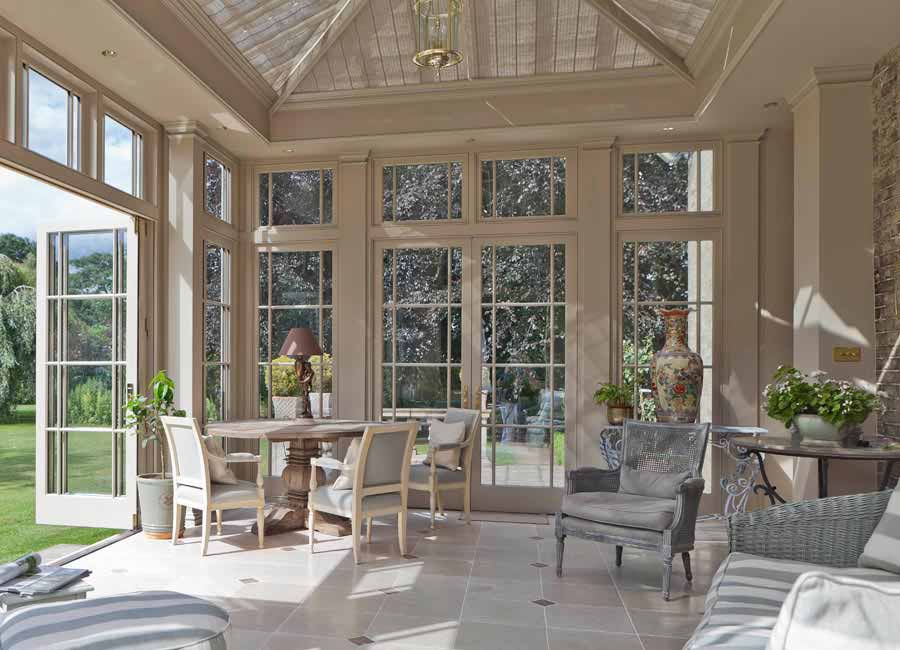